A cookie is information stored on your computer by a website you visit. Cookies often store your settings for a website, such as your preferred language or location. This allows the site to present you with information customized to fit your needs. As per the GDPR law, companies need to get your explicit approval to collect your data. Some of these cookies are ‘strictly necessary’ to provide the basic functions of the website and can not be turned off, while others if present, have the option of being turned off. Learn more about our Privacy and Cookie policies. These can be managed also from our cookie policy page.

In August, DPTI released a discussion paper on local heritage with views being invited to DPTI by 7 October (view here) (views were initially sought by 9 and then 23 September).
The public are invited to a Heritage Community Forum on Monday 26 September 6 - 7.30PM in the Adelaide Town Hall. Please RSVP to Cassia Dafoe c.dafoe@adelaidecitycouncil.com 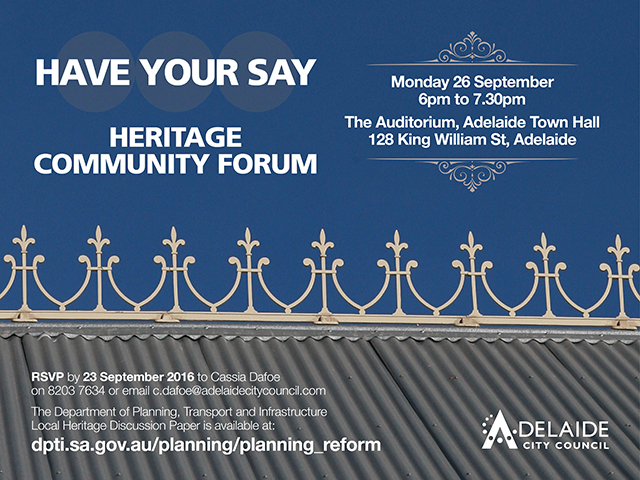 Note that Council, at its meeting on 24 August 2016, resolved as follows:

‘That Council notes with concern the State Government’s discussion paper on changes to the way local heritage places are recognised and managed and;

The Lord Mayor has forwarded correspondence to the Minister.
The release of this local heritage discussion paper commences a process of consideration around the statutory framework associated with built heritage identification and ongoing management.
Built heritage is a celebrated part of Adelaide’s liveability, as recognised in the City of Adelaide 2016 - 2020 Strategic Plan and through various research projects.
Background: