A cookie is information stored on your computer by a website you visit. Cookies often store your settings for a website, such as your preferred language or location. This allows the site to present you with information customized to fit your needs. As per the GDPR law, companies need to get your explicit approval to collect your data. Some of these cookies are ‘strictly necessary’ to provide the basic functions of the website and can not be turned off, while others if present, have the option of being turned off. Learn more about our Privacy and Cookie policies. These can be managed also from our cookie policy page.

What is an Asset?

City of Adelaide defines an asset as a physical resource owned or under the care, control and management of Council that contributes to the community’s needs for access to major economic and social facilities. Assets include stormwater and drainage, streets and transportation infrastructure, buildings, lighting and electrical infrastructure, Park Lands and open space areas (including street trees) and urban elements.

What is an Asset Management Plan?

An Asset Management Plan outlines the overall direction, priorities, and targets in terms of infrastructure maintenance and delivery, including the delivery of associated customer services.

How have the Asset Management Plans been developed?

In June 2021 Council adopted the Strategic Asset Management Plan (SAMP) and in December 2021, the Strategic Property Review. Both documents outline the strategic direction of the management of Council’s building and land portfolio.

The SAMP, Strategic Property Review, Asset Management Policy, and the Long-Term Financial Plan (LTFP), all feed into the development of the AMPs.

AMPs provide a snapshot of the current and future state of the city’s infrastructure and ensure the City of Adelaide is maintaining and renewing its $2 billion of assets in a cost effective and sustainable manner, while reflecting the needs of the community.

The City of Adelaide is now undertaking a comprehensive review of its AMPs This review includes consulting with our community on the associated levels of service.

The levels of service within an AMP determine at what state the asset stock will be maintained and when intervention, such as treatments or replacement, will occur. It will also define the nature of replacements. For example, whether a simple like-for-like or more complex build-back-better approach is taken.

Stage 1 of consultation (in late 2021) focussed on Park Lands and Open Space and Streets and Transportation. Feedback suggested that current service levels appear adequate in most areas, but with some need for improvement in the provision of cycling infrastructure, and the maintenance of our footpaths.

This engagement, stage 2, will focus on the community level of service for our buildings.

The final AMPs will be informed by the feedback received during the consultation processes.

Why do we need to review our Asset Management Plans?

Beyond the legislative requirement, in our growing city there is a clear need for a planned, systematic approach towards key infrastructure asset maintenance, upgrade and associated service delivery to ensure Council allocates limited resources to areas of greatest need. The aim is to consider community needs and appetites, in line with the available budget and Council’s long-term strategic priorities identified in the City of Adelaide Strategic Plan 2020-2024 [Strategic Plan 2020-2024].

When can I see the Asset Management Plans?

Council is currently in the early stages of developing the draft AMPs and is seeking input from the community to ensure all views are considered. Resulting AMPs will go out for community consultation following the relevant level of service engagement and aligning with the business plan and budget process.

What is this consultation about?

This consultation is about ensuring the community can provide feedback from the outset and remain involved throughout the process of our development of the draft Asset Management Plans.

We understand that the only way we can effectively manage our assets is by partnering with the ultimate users of our infrastructure and services – our community.

We are committed to remaining attuned to community views, aiming to understand and act on local sentiment and deliver better, more sustainable outcomes, for generations to come.

What assets does this consultation cover?

This consultation focusses on Council Buildings, which include:

The City of Adelaide has three Libraries located throughout the city. Located on Hutt Street, Tynte Street and the City Library at Rundle Place. These facilities provide a wide range of books and resources and provide community activities for residents and visitors.

The City of Adelaide has three community centres throughout Adelaide and North Adelaide with rooms for hire, spaces and a range of hosted activities in collaboration with the local community.

With over 207 hectares of sporting open space in the Park Lands, many sporting clubs and organisations lease facilities covering a wide range of sports.

Sport and fitness form a high percentage of Park Lands usage including areas of irrigated open space for ovals, pitches and courts that is complemented by 66 buildings and facilities supporting clubs, associations and their members in using the parks. A total of 23 clubs or associations currently hold licences/leases to use the Park Lands.

Public toilets provide a service to a wide range of community members of varying ages and abilities, including residents, workers and visitors to the city.  The provision of convenient and accessible facilities is important in supporting a welcoming and dynamic city.

City of Adelaide provides 55 public toilets (including publicly accessible) throughout the City and Park Lands. Publicly accessible toilets are those secondary to another service (such as a library, community centre or commercial building).

Public toilets are also provided in privately owned space such as shopping centres, licenced premises, food outlets and other retailers throughout the city.  Access to these facilities is generally only available to patrons and is limited to the opening hours of the building.  Facilities are also available at other public places managed by the State Government (or agency) such as the railway station. 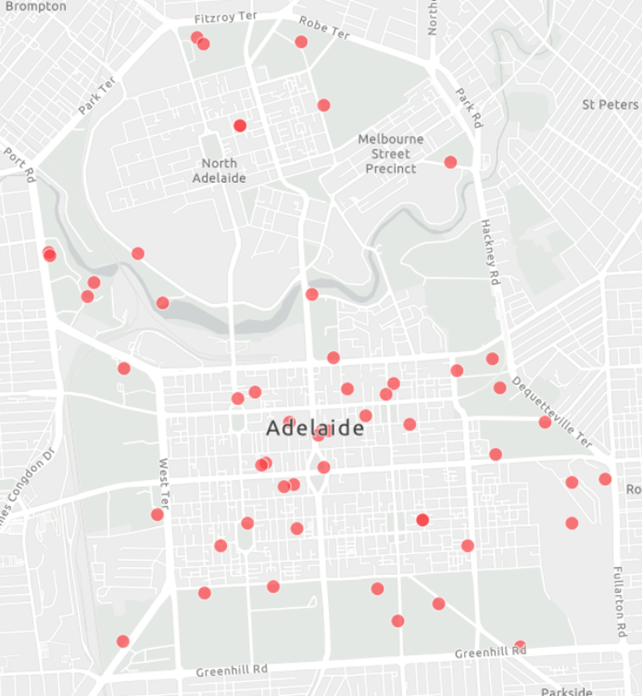 The Adelaide Town Hall and Eagle Chambers (constructed 1863-66) and Methodist Meeting Hall buildings house a variety of Council Functions including, Civic, Public, Function Centre and a Café. The building uses include community services (such as concerts, weddings, graduations and other events) and corporate services (Council and Committee meetings, civic receptions and accommodation for the Mayor, Councillors, CEO and Council administration).

Located within Park 1 PIRLTAWARDLI (Possum place), the North Adelaide Golf Course offers 54 holes over three courses. There are three buildings that service the golf course including the North Adelaide Clubhouse and the Par 3 café.

There are three independently run restaurants and venues within the Park Lands. These include the Pavilion Function Centre and Red Ochre and Jolleys Boathouse.

Established in 1869, Adelaide Central Market is one of the largest undercover fresh produce markets in South Australia. It offers a range of fresh food, along with some of Adelaide’s most popular cafes and eateries.

I have previously provided feedback on similar topics. How is this different?

City of Adelaide manages a large and complex range of assets. It is sometimes necessary to consult on several related topics. This ensures we are informed about the full spectrum of community needs and views which translates into plans that better cater to the preferences of the city's residents and users. Council reviews its plans and practices on an ongoing basis to ensure a best practice approach, optimising community outcomes.

This consultation process is specifically focusing on providing information to guide the development of asset management plans. Feedback from this consultation will also build on the feedback we have received previously through relevant associated projects.

How do I provide my feedback?

There are several ways in which you can provide feedback:

Email your comments to yoursay@cityofadelaide.com.au.

Written Submissions
All written submissions must be received by 5.00pm on the date advertised and should be addressed to:

All feedback will be collated and analysed by the project team. The preferred level of service approach for each asset category will then be incorporated into the draft AMPs, which will go back out for community consultation as draft documents for final comment.