Why is there only one preferred location for the building?
Why is this location different from the area identified in the original Masterplan for Victoria Park?
Why do we need public toilets in the southern sports field in Victoria Park/ Pakapakanthi?
Why do we need change rooms?
Is this going to be used as a home change room for a club?
Who will be using the building?
Is this part of the Clipsal 500 annual build?
How will Council stop anti-social behaviour?
Will the toilets be locked at night?
What materials will be used?
How big will the building be?
Are there any green elements in the building design?
Has Council allocated a budget for this project?
When will work commence?
How do I provide my feedback?
What happens to my feedback?
How do I know my feedback has been received?

Why is there only one preferred location for the building?

Several locations were considered for the location of the building in the initial design phase. Locations were considered based on their impact on residents, accessibility for stakeholders and park users, proximity to the playing fields and impact by annual Clipsal 500 build. The Adelaide Park Lands Authority and Council have chosen Site A as their preferred location, Site B will be considered as an alternative only if Site A was no longer a viable option.
Please refer to the Site Plan image for reference. 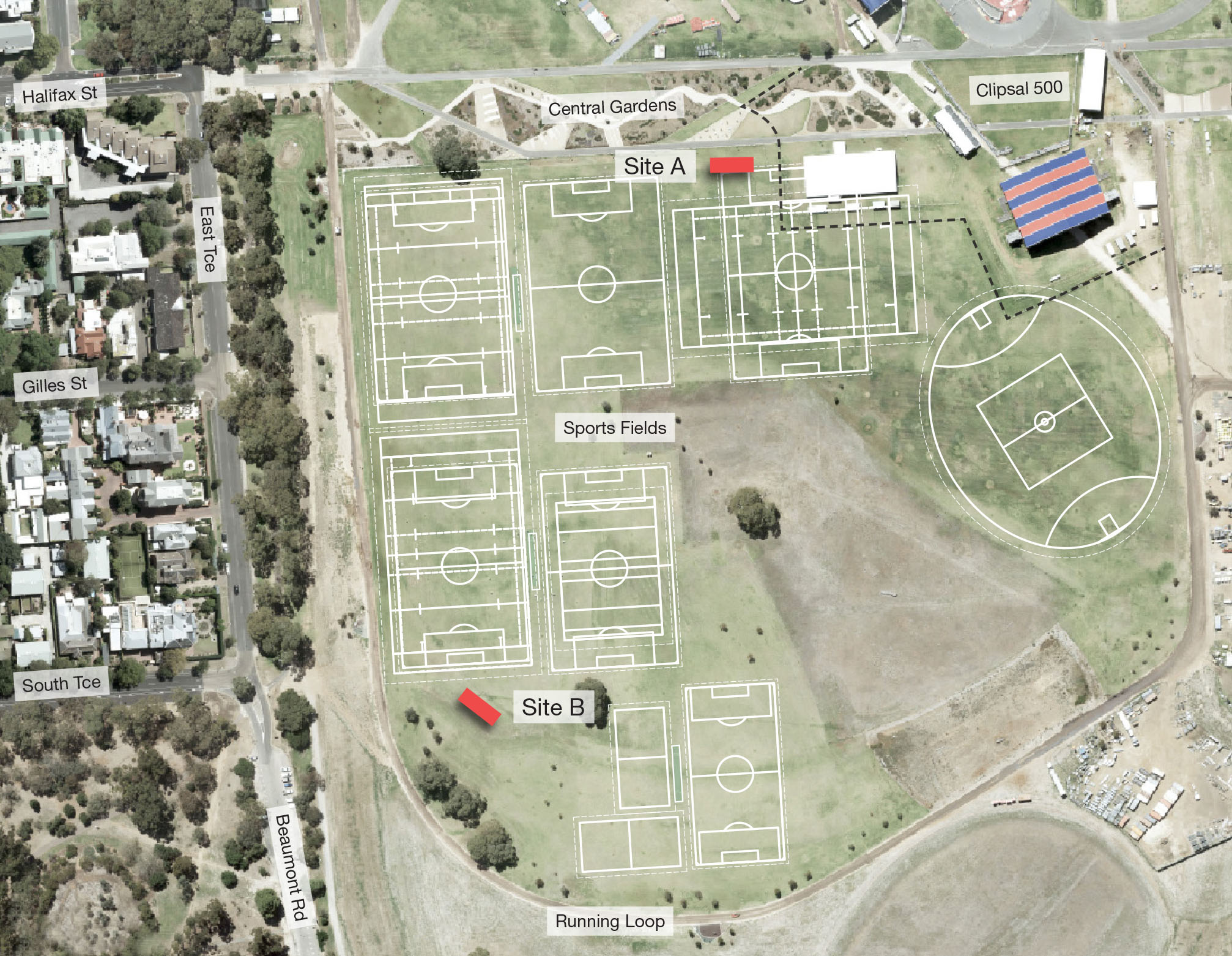 Why is this location different from the area identified in the original Masterplan for Victoria Park?

The Master Plan nominally indicated sites for toilets and change room facilities in Victoria Park to support the southern sports fields.
The Master Plan did not include the remnant vegetation management area, which has since been established within the centre of where playing fields were proposed which affects mainly the planned eastern fields.
The Master Plan also envisaged on-site parking along the eastern edge of the sports fields, providing direct access to a new building. Due to Clipsal 500 operations and ground conditions influenced by contamination remediation works, the western sports fields have greater carrying capacity compared with the eastern fields.
As such, all these factors have resulted in the reconsideration of the siting of the building with the most viable locations to the north and to the west of the fields.
Top Of The Page

Why do we need public toilets in the southern sports field in Victoria Park/ Pakapakanthi?

Council’s Public Toilet Operating Guidelines recommends that public toilets should be a distance of no more than 500 metres from each other.
People using the most southern sports field in Victoria Park are up to 900 metres from the nearest public toilet, which is located at the northern end of Victoria Park.  We have received complaints from members of the public about casual users of the southern sports fields urinating in the open.
Top Of The Page

Why do we need change rooms?

Previous feedback from current and potential users of the southern sports fields has identified a lack of appropriate amenities on site as a failing and not conducive to supporting formal use of the fields by community groups, in particular women.

Is this going to be used as a home change room for a club?

Who will be using the building?

Licence holders and organisations booking sports fields will have access to the change rooms as part of their booking.  Other groups utilising Victoria Park / Pakapakanthi such as running groups will also have the opportunity to hire the facilities.  These rooms will be locked at all other times with only the public toilets accessible to the general public.
Current and previous licence holders have included the South Australian Cricket Association, Prince Alfred College and Christian Brothers College along with casual bookings by a range of community groups. An expression of interest to licence the fields will take place in 2017.
Top Of The Page

Is this part of the Clipsal 500 annual build?

No.  The Motor Sport Group (now part of the South Australian Tourism Commission) has been consulted during initial design phase but at this point have no interest in utilising this building. The location of the building does not impact on the current build of Clipsal 500 infrastructure.

How will Council stop anti-social behaviour?

The building design has been based on CPTED (crime prevention through environmental design) principles.  Well-maintained public toilets contribute to a perception of safety and a well-managed public realm. People feel more confident using toilets that are well-designed for safety, clean and pleasant to use.
The public toilets and change room will encourage groups to use this area of Victoria Park and this activation will help to discourage anti-social behaviour.
Top Of The Page

Will the toilets be locked at night?

It is envisaged that the toilets will operate between 7 am and 10 pm at night. These times can be reviewed depending on demand for the use of the building.

What materials will be used?

How big will the building be?

The change room and toilet facilities will be a single storey building with 2 unisex toilets, 1 accessible toilet, change rooms and storage. The building will be approximately 90m2. The final design and size of the building may alter based on feedback.
Please refer to the Concept Design Plans A, B and C for further reference.
Top Of The Page

Are there any green elements in the building design?

Where possible the design will incorporate sustainable and green elements.

Has Council allocated a budget for this project?

No. Council has received a grant of $200k from the State Government for the establishment of toilets and male/female change rooms in Victoria Park. It is estimated that the project will cost $750k to complete, however this is dependent on a number of factors including the location, extent of contamination and final design of the building. Once the community and stakeholder engagement has been completed and the results analysed, staff will present the results along with an appropriate budget request for Council's consideration.

When will work commence?

The work is likely to commence within the 2017/2018 financial year.

How do I provide my feedback?

There are a number of ways in which you can provide feedback:
Feedback Form
Complete the Feedback Form which asks specific questions about this project and provides an opportunity for general comments regarding the project/proposal.
Alternatively comments can be emailed to yoursay@adelaidecitycouncil.com.
Written Submissions
All written submissions must be received by 5.00 pm on 4 October 2016 and should be addressed to:
Community Consultation
Victoria Park / Pakapakanthi Change Room & Toilet Proposal
GPO Box 2252, Adelaide SA 5001
Top Of The Page

What happens to my feedback?

Your feedback is important and will be used to inform the design of the proposed project should it proceed. The results of this engagement will be presented to the Adelaide Park Lands Authority and Adelaide City Council for final endorsement in late 2016.
Updates will be included on this website for your information.
Top Of The Page

How do I know my feedback has been received?

All feedback forms, submissions or correspondence will be acknowledged either by email or in writing so you know your comments/feedback has been received.
Top Of The Page